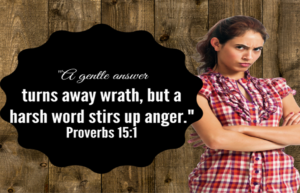 I wasn’t pretty. At all.

A while ago, I was on a phone call. The woman on the opposite end of the phone line was defensive, obstinate, cynical, intolerant, dogmatic . . . I could go on. Worse than her “charming” personality was the fact she didn’t allow me to speak. She kept cutting me off in mid-phrase, interrupting my attempts to explain. Like a rolling commentary she continued to talk on top of my voice when I was speaking, as if I weren’t even present in the conversation. And attitude? Yeah, she had one. She had a chip . . . no, a boulder on her shoulder, obviously present way before I called her and offered my chipper greeting.

Sadly, the part I played in this scenario got ugly. In a matter of mere moments my extreme frustration with this woman took me from 0 to 8.0 on the Richter scale of emotions, and I’m ashamed to confess I ended up . . . matching her raised voice.

This woman wasn’t allowing me to speak, she didn’t value my input, and she cast a defensive chill in the air from the second I said hello. She drove me—correction, I allowed her to drive me to a point of desperation, which erupted in a disgraceful display of bad behavior by me. When I hung up the phone, I was left a crumpled mess of a boiling blood pressure and burning tears. Adding insult to injury, it was I, not this woman who ended up suffering in the wake of my own destruction.

We all run across difficult people. It’s a reality of life. Sometimes, we’re grossly misunderstood, taken out of context, or perhaps not even “heard” at all. We’ve all experienced that pesky button pusher who appears to delight in needling until they get a desired reaction. A reaction that isn’t the most becoming.

Friends, as much as I’d love to sit here and blame my abhorrent manners on this arduous woman, I’ve only myself to blame for the wicked headache I acquired following my phone conversation. Regardless of what was dished out to me, I had a choice of how to respond.

“Everyone should be quick to listen, slow to speak, and slow to become angry.”

When we’re quick to respond without any forethought, we allow others to have power over us.

So, what can we do to diffuse a difficult situation? Here are some ideas.

“A gentle answer turns away wrath, but a harsh word stirs up anger.” – Proverbs 15:1

“Anger is an acid that can do more harm to the vessel in which it is stored than to anything on which it is poured.”  — Mark Twain

Lord, help us to be mindful of your presence amid our difficult situations. May we draw upon your strength to measure our reactions to reflect respect and understanding so others may see You at work in us. In Jesus’ name, amen.

2 thoughts on “Four Ways to Diffuse a Difficult Situation”