Some things are not always as they seem. From time to time that reality hits me like a ton of bricks, or perhaps a ton of feathers. 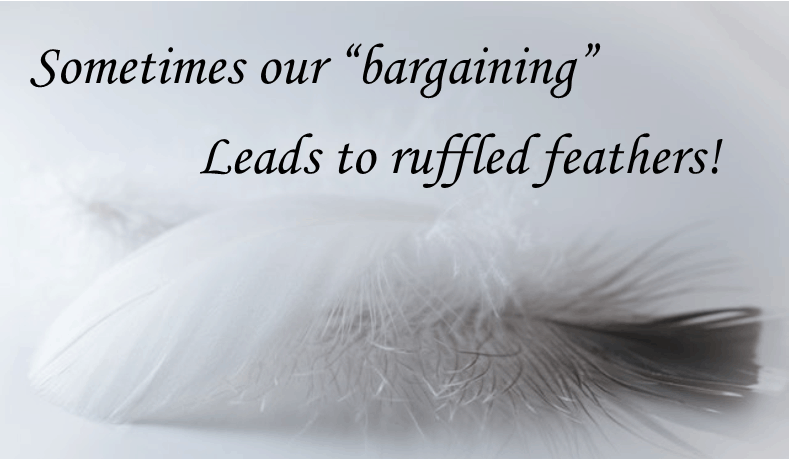 Some things are not always as they seem. From time to time that reality hits me like a ton of bricks, or perhaps a ton of feathers.

I’ve opted out of any Black Friday shopping for a few years now however, a seemingly-too-good-of-a-deal-to-pass-up caught my eye in the newspaper flyers on Thanksgiving Day. I squinted, holding the paper closer to make sure I was correctly seeing the significantly low-price tag on a specific item. Which, I was.

Friends, I needed a warm jacket. I mean like, really warm. I had an upcoming trip to New York City, to be followed by another trip to Pennsylvania over the holidays. Locations that boast wind, bitter temperatures, and possible SNOW. The warmest attire tucked away in this Florida girl’s closet was a small batch of sweatshirts and cardigan sweaters, none of which would suffice in Northern temperatures.

I didn’t arise at 0-dark-hundred or anything crazy, but I did head out midday on Black Friday to grab that “deal”. Yes indeed, I landed myself a “down” jacket at a department store (which shall remain nameless) for next to nothing. It was such a bargain I felt as if I were stealing; I wanted to hurry the cashier along, so my purchase wouldn’t go sour before I completed my transaction. Proud of my deal of the century I strolled around the next several days with a smug smile for what I pulled off. I mean, I hit pay dirt and made sure everyone around me knew it.

Now . . . a “down” jacket, you may or may not know, is filled with “down” feathers. I actually spotted one of the tiny white feathers poking out of the jacket when I bought it (perhaps a warning sign), however quickly dismissed it. I heard anything with “down” in it will keep you warm, which was confirmed enthusiastically by my dry cleaner.

“Oh yes! You’ll be completely toasty with a down jacket—have a fun trip!”

Oh, I had fun all right.

The fun started early on in my short trip to New York City with my husband. Traipsing around the city in frigid temperatures, I noted how warm that jacket kept my midsection. The rest of me was freezing but my waist, arms and back were shielded like a snug blanket. Then, something strange began to happen.

Standing at a crosswalk, waiting for the light to turn, I spotted a tiny white feather float in front of my face. Later, in line for an attraction, I spotted one of those same white little feathers resting on the back shoulder of the person standing in front of me. Then, after taking my jacket off at a restaurant, I brushed off several delicate, white wisps of feathers from my pant legs and it suddenly hit me.

Nothing could be done to stop it. I molted in line for the Empire State Building. I molted throughout Macy’s. I managed to leave behind my signature tiny, white feathers at each and every pub and restaurant we visited. There were even a few feathers dancing in the air inside a Broadway theater. The molting seemed to become increasingly worse as time went on, to the point that, each time a little white feather drifted between us my husband rolled his eyes, shaking his head. Finally, with a slight frown I voiced an admission to my husband.

Embarrassed and a bit irritated, I began to reflect on how, in my life I often try to strike deals, specifically with God. I attempt negotiated bargains in hopes to avoid any hard work. I often settle for what appears to be better, perhaps only because it looks or feels “easier”.

Truth is, our bargaining often leads to unmet expectations. Things don’t turn out as planned. We fall short. We become disappointed. Ultimately, in our quest for an easy deal, we get what we pay for.

I’m so grateful God does not operate the same way I do.

“Jesus Christ is the same yesterday and today and forever.” – Hebrews 13:8

God does not bargain with my life. He doesn’t negotiate “deals”. He does not waiver, He does not falter, He shows no partiality. He always, always stands at the ready to offer His unconditional love, His unfettered grace, and His merciful forgiveness to those who genuinely seek it.

Gazing at the fluffy clouds outside my window, I pondered God’s truths on the plane ride back to Florida, with my feather-stuffed jacket folded in my lap. Finally turning my head to glance at my sleeping neighbor, I noticed some tiny, white feathers begin to accumulate on her black leggings. Mortified, I mustered enough courage to lean slightly forward and offer a few gentle puffs of air her way, hoping to dislodge the feathers. My efforts proved futile. Those feathers stuck like glue.

When we de-planed I wondered if I should say something. I decided no. Instead, I witnessed this young woman in the black leggings walk down the airplane aisle in front of me—attractive, friendly, and confident . . . tiny, white feathers and all.

So, now I guess I need to shop for a new jacket. Perhaps regular price this time.