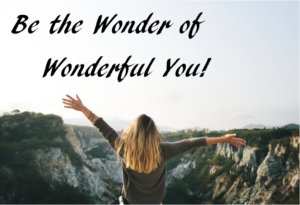 I did it again!

I CRIED at a children’s movie. Yes, I have a habit of doing this. (Sigh.)

A while ago I took my granddaughter to see “Wonder Park”, and even though the film somewhat limped along at times, it was quite creative and gave me a bit of food for thought. Now, before you declare me “certifiable”, please know I was not actually “boo-hooing” as many of you are picturing, especially those of you who personally know the sap that I am. No, let’s just say a couple of places in the movie tugged at my spirit a bit, causing me to blink back a few gentle tears. My granddaughter didn’t understand this at all. Instead, she just rolled her eyes at her crazy Mor Mor. And that was just fine.

Yeah. So, there we were, watching a movie about a spunky, young girl named June who possessed an out-of-this-world imagination. June, along with her mom created “Wonder Land”, a make-believe amusement park with talking animals and delightful adventures. Both of June’s parents supported her extreme creativity, but it’s June and her mom that spent time each day planning more and more elements to add to Wonder Land. All of this was wonderful, crazy fun . . . until.

June’s mom became ill, which necessitated an extended hospital stay, leaving June and her dad to go it alone. June became depressed and spent increasingly less time on Wonder Land. She reached a point of refusing to play because her mom wasn’t with her. Despite her dad’s constant encouragement, she eventually packed up her entire creation, vowing to cease playing with it ever again.

Hmmmm. I was beginning to draw some parallels.

Without giving you a play-by-play of the story, just know at one point June was transported to her “live” Wonder Land and came to discover, in her sadness, she’d adversely affected the Wonder Land cast of characters and their environment. After dismissing the passions of who she was, June had allowed the fear of losing her mother to paralyze her, causing her to give up. She came to realize she was ultimately the very cause of the darkness and peril that had befallen her imaginative world.

As I sat with my salty popcorn in that theater surrounded by squirming children, I suddenly identified with June. I remembered the pain of being separated from someone I dearly loved. I recalled times when I’ve “packed things up” and threw in the towel when things in life got tough.  Sadly, I realized when I sometimes abandon who I am created to be amid difficulty and struggle, it most often makes things worse and . . . dark.

June finally faced a turning point when she remembered her mother’s words: You are the wonder in Wonder Land. She discovered the importance of being true to herself regardless of her circumstances, and that this was the very desire of the one she dearly loves, her mother.

I am reminded of a passage in God’s word declaring the “wonder” you and I are:

“For we are God’s masterpiece. He has created us anew in Christ Jesus, so we can do the good things He planned for us long ago.”   — Ephesians 2:10

Know this: it is important for you and me to be true to ourselves . . . to be who God created us to be, in all our circumstances. This is the very desire of the one who dearly loves us, our Heavenly Father.

As June adjusted her perspective and began getting “back to herself”, she reflected on the darkness she previously inflicted on Wonder Land. The huge mass of black clouds had disappeared; however, she could still see a small, smoldering patch of gray matter hovering off in the distance. In this moment she told her Wonder Land friends, “Maybe it (the darkness) will never fully go away. Maybe it’s there to remind us to look at the light that surrounds us.”

Darkness is a reality. There will always be dark times at points in our lives, sometimes off in the distance and at times, up close and painfully personal. We can still experience joy though, God’s joy, amid our rocky terrain. If we rest in the power and assurance of God and His promises, He will provide strength and help us maintain joy during our trials.

May you be the wonder you are and draw your strength from the One who loves you beyond measure.

Wishing you joy on your journey, you wonderful Wonder you!