Tackling the Tug of Technology 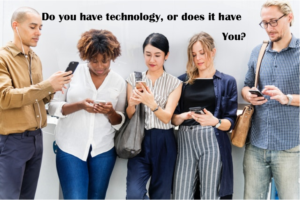 Pu-leeze! Did my eyes deceive me, or was I really witness to a most disturbing, tragic event recently?

Hubby and I were out to dinner at one of our favorite hangouts doing what we love to do best . . . people-watch. On this occasion we specifically took note of the extreme number of patrons who were on their phones. They weren’t “talking” to anyone mind you . . . well, at least not verbally. No, they were either texting or scrolling at warp speed. We determined the majority of customers in the restaurant had their heads in their phones, which gave us initial chuckles. Soon however, things got a bit more serious.

We watched as couples sat across from each other looking down at their phones. Not only did they not speak to each other—they didn’t even look at each other (scroll, scroll, scroll). We noted girlfriends sitting side by side texting other people instead of talking to each other. We watched as tables full of families or friends constantly checked who-knows-what on their phones, or, spent most of their time photographing each other rather than engaging with each other. As we scanned our surroundings in the restaurant one scene stopped me in my tracks.

“Oh, my goodness.” I swiped at my husband’s shoulder. “Look at that.”

In the distance I’d spotted an elderly man seated at a table with a younger woman and two young children, presumably his daughter and two grandchildren. The woman was smiling as she stared at her phone, scrolling, and the two kids were glued to their iPads while Grandpa just sat back in his chair looking around the restaurant. A short bit later when their food arrived the woman and her children took sporadic bites of their meals while keeping their eyes glued to their technology. The elderly man sat in silence eating his dinner.

A twinge of pain stabbed at my chest as I observed this man . . .  dining alone at a table of four.

How did we become like this? Why have we allowed ourselves to get so far away from the human factor of relating to each other?

Have I been guilty? Sadly, yes.

Can we blame technology? Well, yes and no. We’re certainly sucked into the arms of today’s gadgets. Televisions are bigger with extreme capabilities. We have Kindles, iPads, portable gaming systems, and our cell phones do everything but wash the dishes. Then there’s social media in constant competition for our attention. Facebook, Instagram, Twitter, YouTube, WhatsApp, Tumblr, Snapchat, Pinterest . . . these are just a few of hundreds. We’re innocently lured into using our devices until they become an addiction.

Unfortunately, this addiction plays out at the expense of our relationships. We text more than talk, and when we’re with someone, our attention is divided by that “pull”. We sometimes take oodles of pictures, posting in multiple mediums. For whom? And . . . why? Think about that.

Am I saying we should never take photos of our events and share them? A resounding NO. After all, it is “social” media.

Sometimes, however we get so busy snapping photos we miss the moments of the events we’re in, to the detriment of the company of people we’re with. Additionally, we find ourselve comparing our lives to the seemingly “picture-perfect” lives others present on a computer screen.

You are enough, just as you are. Keep in mind, images of picture-perfect lives are sometimes falsely advertised.

Sadly, the very gadgets designed to connect us are also driving us apart.

Listen. I get it. It’s here. All of our “gizmos” are possible through tremendous strides in technological progress. However, we’ve only ourselves to blame for the lack in human connection.

We need to let others know they are noticed for who they are and not because of a barrage of posted photos.

We need to let others know we appreciate them so they don’t feel they have to count how many “likes” they have on Facebook to validate their worth.

At times we need to photo-document our events less, and participate in our “moments” more. We need to be engaged when we’re with our families, friends, and co-workers to demonstrate they are valued and worth our full attention.

How? Here’s a few ideas:

One of Royal Caribbean’s television ads says it best:

I realize some of you reading this will agree, and others of you are giving me a good eye roll right about now. That’s okay. In my book, we call still love and respect each other even if we disagree with one another.

“Technology is a useful servant but a dangerous master.”  –Christian Lous Lange

2 thoughts on “Tackling the Tug of Technology”